Leadership, management, entrepreneurial innovation, and a focus on customers were all factors that lifted LG Group from a small family-owned enterprise into a global business, according to academics participating in an online seminar in November in honor of the late LG Honorary Chairman Cha-kyung Koo and the late LG Chairman Bon-Moo Koo.

Professor Ho Geun Lee, president of the Yonsei Sangnam Institute of Management (SIM), was the host for the seminar, which was cosponsored by the Yonsei School of Business and the Korean Academic Society of Business Administration (KASBA). Its scheduling marked the first anniversary of the death of Honorary Chairman Koo. He was instrumental in the LG Group’s founding of the globally ranked institute for executive management training and also involved in construction of its building.

The seminar opened with a video message from Yonsei University President Seoung Hwan Suh, who emphasized that "The history of the company that has led the economic development of Korea is compressed in the history of LG Group, which has grown into a global company. This case study analyzes the LG Group's history, evolution, and success comprehensively. It can be well utilized in the future in the field of business education." 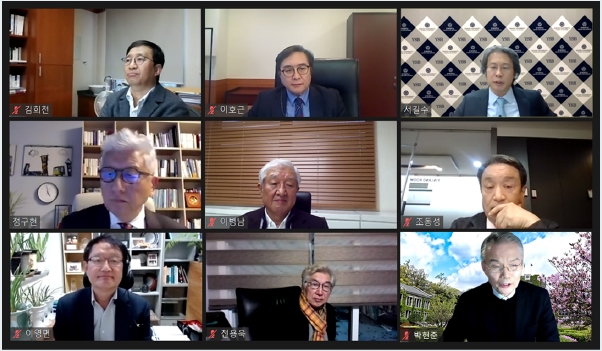 In the opening session of the seminar, YSB Emeritus Professor Hun-Joon Park and Professor Hicheon Kim of the Korea University Business School summarized the results of their research into the ingredients of the LG Group’s success. Emeritus Professor Park analyzed the outstanding leadership of LG Group from two perspectives, "customer-centeredness and respect for humanity" and "modesty and consistent identity."

He especially praised LG’s "maintaining high aspirations while creating value for customers," and the "maintenance of internal diversity and establishing a culture of cooperative trust" through "a learning network of mutual respect." He also pointed out that the drivers of LG Group's growth come from an emphasis on "modest leadership," "appropriateness of context," "persistence in constant innovation," and "consistent identity" in ?execution.?

Professor Hicheon Kim then analyzed the LG Group from the perspectives of ownership structure, management specialization, and management philosophy. He demonstrated that the LG Group grew into a global company based on "simplification of ownership structure" through the establishment of holding companies and separate affiliates, "cultivation of responsible, autonomous and professional management," and a "competitive edge reflecting unique historicity."

Young-myeon Lee, KASBA President, recalled the deep ties between the LG Group and KASBA. He explained that Honorary Chairman Cha-kyung Koo had received the Sangnam Business Administration Award, which KASBA has awarded annually since 1995.

Kil-Soo Suh, YSB Dean, then summarized the history of SIM and Honorary Chairman Cha-kyung Koo's leadership during construction of the SIM building. He explained that the LG Group established SIM as a nondegree institute of management to present a new model for industry-academic cooperation.

Business cases presented at the event will be published in the KASBA journal “Korea Business Review.”

The Sangnam Institute of Management operates as an educational institution affiliated with the Yonsei Graduate School of Business and is the only institution in Korea for training of executives at various stages of their career development, with special emphasis on instilling a global perspective. It was established in 1999 with the financial support of LG Group Honorary Chairman Cha-kyung Koo (pseudonym “Sangnam”) and is celebrating its 21st anniversary this year. In addition to its unique status in Korean business education, SIM is ranked 57th in the executive education category in the listings of the “Financial Times” publication.