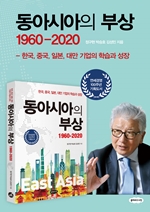 As part of its celebration of its 100th anniversary in 2015, Yonsei School of Business committed to a “K-Management Study” to create a new paradigm for Korean business studies by analyzing various Korean companies over the past 60 to 70 years and identifying success stories and the business models behind them.

The Rise of East-Asia in 1960-2020, (Cloudnine Publishers) was published in January 2019 in Korean. The book was co-authored by Emeritus Professor Ku-Hyun Jung of International Business; Seung-Ho Park, who has served as a professor in Hong Kong and Shanghai; and Professor Sung-Min Kim of the University of Loyola in Chicago.

As the book's subtitle Learning and Growth of Korean, Chinese, Japanese and Taiwanese Enterprises shows, the book deals not only with Korean companies, but also with the national economies and enterprises of the four major East Asian countries. The authors note that since the 19th century the economies of all four countries have been closely associated and highly interdependent. Although the main focus is on the years since 1960, the book includes a background description of the 19th century industrial period.

The authors take a macro approach to business management and set up a hypothesis that the economic system affects corporate governance and management systems and assume that geopolitical variables influence the economic system. Topics covered and their organization are as follows: Chapter 1, The Economic System and Representative Enterprises; Chapter 2, The Performance and Determinants of Economic Growth of the Four Major Economies; Chapter 3, The History and Governance Structure of Japan's Big Companies after the War; Chapter 4, The Formation Process and Change of Large Korean Enterprises (Chaebol); Chapter 5. The Characteristics of Taiwanese Enterprises and the Corporate Ecosystem; Chapter 6, An Efficiency Analysis of Chinese National Enterprises; Chapter 7, A Management Performance Analysis of Chinese Private Enterprises.