Professor Tae Hyun Kim of Operations Management gave his last lecture on December 8 before his retirement in February 2017. He has been a full-time professor at YSB since March 1987 and taught for 30 years. He will become emeritus professor in March 2018. At his last lecture, Professor  Kim thanked Donghoon Kim, dean of YSB, and students, saying that he was always grateful for his 30 years at Yonsei. He also said he regarded his students like his own children and wished a bright future for them. 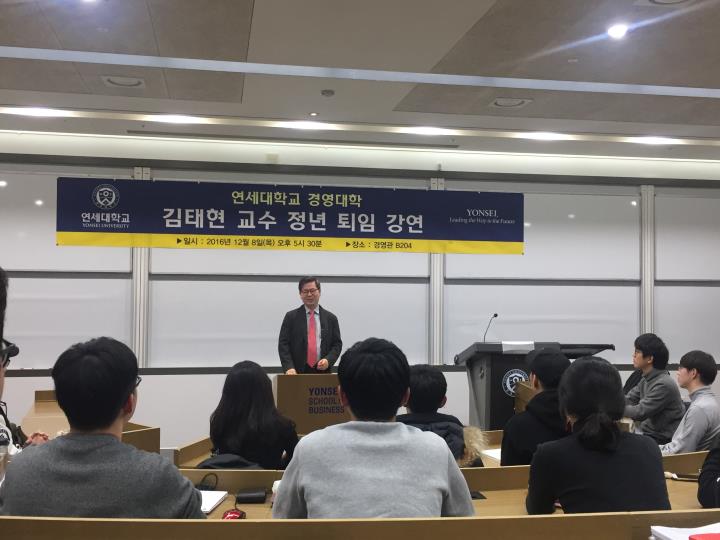 He gave three pieces of advice: ▲ Always be proud of yourself ▲ Make good relationships with others ▲ Be humble but courageous and open to learning.

Moreover, he did not forget to encourage his students. Although employment and career choices have become much more difficult than in the past, he said, if the students don’t give up, believe in themselves, and take on the world with a positive attitude, the Yonsei community will serve as their powerful supporter.

His students also shared their thoughts on his retirement. “I learned so much from Professor Tae Hyun Kim’s Supply Chain Management class, and I feel sad to know that he will be leaving Yonsei,” Jaeho Park (entering class of 2012, Business) said. Seongmu Hong (entering Class of 2012, Business) added, “He was always kind and sincere to his students.”

Other professors also shared their thoughts. “As I remember back in 1994 when I first became a professor at Yonsei, I can never forget how warmly Professor Tae Hyun Kim reached out to me when I was confused and afraid,” Dean Donghoon Kim said. “I thank him for his commitment and contribution and congratulations to his honorable retirement,” he added. Professor Dae Sik Hur of Operations Management thanked Professor Kim for his contribution in building a solid foundation for supply chain management in Korea, and said, “As a senior professor of operations management, he was an impetus for other professors, always thinking of ways to help students.”

A long-time contributor to YSB as well as the Korean society, Professor Tae Hyun Kim’s last lecture closed with photos with students and professors.