The Yonsei University School of Business opened on November 26 the final session of its new “Start-up” class for the fall semester of 2014 at Sangnam Institute of Management. Professors Sang Yong Park of the School of Business, Yong-Hak Kim of the Department of Sociology, and Jaiyong Lee of the College of Engineering created the class to actively support students interested in the challenges of start-up businesses.

The class attracted even more attention because of mentors for the students from among the first generation that opened start-up companies in Korea. These participants included Jung Ju Kim, CEO of NXC, Jae-Woong Lee Daum, founder and CEO of So-poong, Jung-Soo Kim, chairman of JS&F,  Ji-Young Park, founder of com2us, and Gyu-Hak Moon, CEO of Softbank. 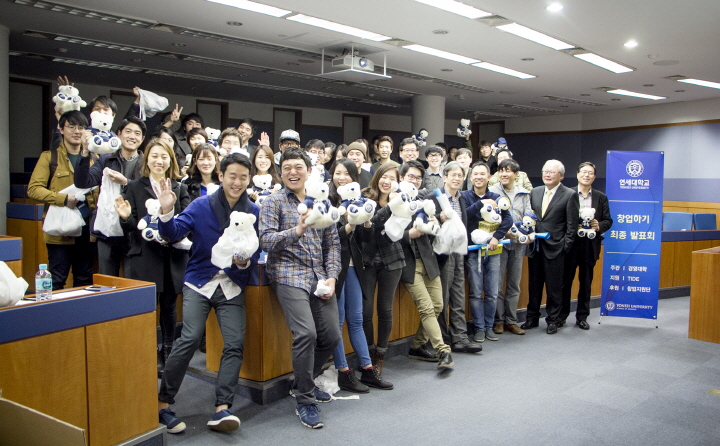 Eight teams made final reports. Like a class with students already prepared to some extent to start a business, the scene at the final session strongly resembled a company’s new project presentation. Members of the “Studio Soodal” team, which proposed a “Popic” service that provides various events and concerts based on GPS, said they were able to greatly improve their analytical capabilities after taking the class, but above all, it was a time to find one’s true colors. The “Major Lab” team, which proposed an  platform named “Yonsei University Jar of Honey” that provides information about the university and its surroundings, called it “a moment to experience failure and frustration, and learn about passion, planning, and putting an idea into practice. Although there were many moments of hardship and of wanting to give up, those moments widened our field of vision to look further ahead.”

The next in line was a product description of “Oasis,” a flower pot from the “Eden Green” team that automatically waters the plant it contains. This team has already won the “Young Social Entrepreneurs Programme” award in recognition of  its realization of significant social values.

In the second round, all of the teams presented their results. The “Brand-NAWA” team, part of the members on a business trip to sign a contract with Taiwanese Costco, proposed a new concept for a direct wholesale service, and revealed their ambition to implement the B2B innovation. The “3reate.com” team, which proposed a platform to link the general public with designers through 3D printers, a sought-after, next generation technology, emphasized how the practical class, like earning patents during class, actually helped in Start-up. The “Pixicle” team, which proposed a future education consulting idea and wished to bring a new path to the field of education, demonstrated their passion by running to directly meet the students. The final presentation was by two teams that very much embodied today’s start-up businesses. “Hi-Brothers,” a team preparing a start-up with the support of the government, introduced a group-based-cloud contact list application called “Peoplelink”; and the “AOOREUM-Planet” team introduced “Liner,’ an application that will conveniently manage online interested-contents. This team plans to open its business in Silicon Valley soon.

The student presentations came to a close, and the mentors greeted each student with words of encouragement. The mentors advised them not to blame themselves for being unable to achieve a lot within a short period of one semester, but to continue to advance and try their best with the passion they have now. Gyu-Hak Moon, CEO of Softbank, especially boosted the student’s morale. “I hope I have met in this class, the future Mark Zuckerberg or Larry Page.” Jung-Soo Kim, chairman of JS&F, also advised them, “Unlike the past, you are the happy generation who has taken class with these famous people. If you think you have better value than others, do not hesitate to start a business.”

Ei-Yeon Hong (entering class of 2011, business major), who was on the “Eden Green” team, was able to take the class despite a very high rate of enrollment competition. She said, “I believe the creation of a class, which actively supports students’ start-ups, is a huge opportunity for students in itself, and I was able to seriously consider starting a business through the mentors’ feedback and various sessions.”   In addition, many of the students who had taken the class hoped it would be offered continuously and bolster the dreams of would-be student entrepreneurs. There’s a high expectation that, just like the reaction from students, the class will be the cradle for a Korean Bill Gates. 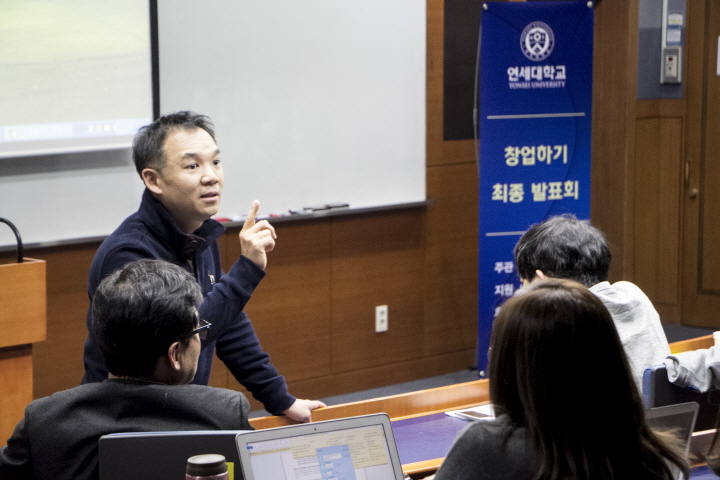