Before addressing “The Fourth Industrial Revolution and the New Korean Enterprise” as the guest speaker at the 18th Yonsei Venture, Innovation & Startup Program (YVIP) Colloquium in October, Sang Heon Kim traced his career path from judge to LG Electronics executive to CEO of Naver and now to the operation of a café called North Terrace. He accompanied those remarks with organizational logos and graphs that represented his level of happiness in each organization.

Then he embarked on his speech in which he divided the current trends in technologies and services into three dimensions. The first trend is artificial intelligence (AI), with robots, and unmanned machines. The second is the proliferation of platform services, and the third is decentralization. 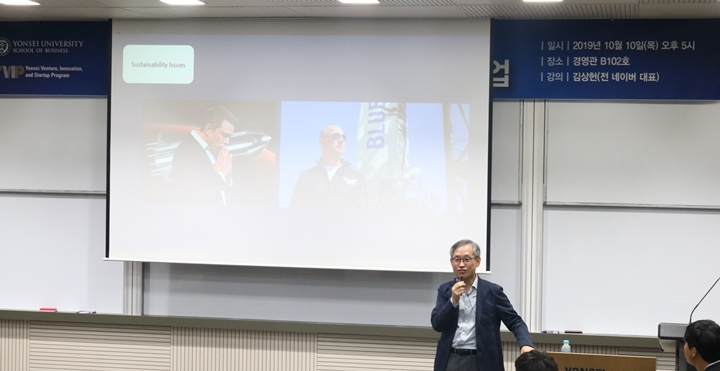 According to Kim, first, AI's performance stands out among the trending in the Fourth Industrial Revolution. He used the game of Go (baduk) as an example. It used to be considered a highly abstract game with complicated human choices caused by the limitless moves available in any one game. However, AlphaGo's defeat of Se Dol Lee, the master in baduk, proved the capabilities of calculations based on machine learning. He also introduced various examples of AI, including Vrew, an automated subtitling service; Jinri Toutiao, a personalized news recommendation platform; and DeepMind Health, a healthcare service.

Moreover, the proliferation of platform services, the second trend in the Fourth Industrial Revolution, is resolving the asymmetries in the access to, and availability, of information. Through platform services, consumers and suppliers who do not know about each other are able to meet. However, the early competition in platform services is fierce because of first-mover advantages based on network theory. In comparison, decentralization, like blockchain in which transaction details are disclosed to all users, is also one of the biggest trends among current technologies and services.

Kim then elaborated on the reasons for Korean startups' rapid growth. He said that startups can grow rapidly because they can easily respond to consumers’ expectations of new products and services and also can innovate to fill gaps overlooked by existing companies.

In concluding, he emphasized that eventually people-centered innovation and development would be necessary. He predicted that because people still seek psychological satisfaction that technological advances alone can provide, services and products that fulfill such needs will gain a competitive edge.