Speakers booked into four first semester classes — Venture Capital, Undergraduate Social Engagement and Enterprise, Production and Service Innovation, and the New Product Management Seminar —were considered of such relevance and broad appeal to YSB students that students not enrolled in the classes were allowed to attend.

Speakers booked into four first semester classes — Venture Capital, Undergraduate Social Engagement and Enterprise, Production and Service Innovation, and the New Product Management Seminar —were considered of such relevance and broad appeal to YSB students that students not enrolled in the classes were allowed to attend.

Urging students to take a global perspective on venture capital (VC), Ki Ho Park discussed its role in the rise of the new economy called the Fourth Industrial Revolution, present conditions in Korea, and in the operations of LB Investment. He also shared his experiences about the overall stream of VC investment in the Silicon Valley, China, and Israel.

“Unicorn” venture companies like those that have registered huge successes in the United States, China, and India are constantly appearing, he said. Especially in China, he said, the mergers and acquisitions (M&A) market has been vitalized, and the market itself is making huge investments. He contrasted it with the problems of the Korean market that are the result of a lack of internationalization, deactivation of the M&A market, and the lack of firms with unique core technologies.

He advised the students to focus on the VC field of venture and to keep challenging themselves by putting themselves in a “growing field not in a stagnant major company.” He also advised them not to restrict themselves to the Korean market but to also develop insights on the global market.

SparkPlus is an office sharing start-up company. As the sharing economy and cloud services take center stage in the Fourth Industrial Revolution, the size of the office sharing business is growing rapidly, even in terms of global trends. ”In the leasing business, the vacancy rate has increased after the subprime mortgage crisis and the ratio of small-sized businesses has risen,” he said, introducing the basis for the trend toward office sharing.

Using the slogan ‘‘Stay focused. We’ll do the rest,” SparkPlus basically helps a customer company achieve flexibility in its use of office space and to minimize the costs and concerns associated with housing a company. The company provides three categories of services — open, private, and custom — tailored to the size of a client company. Facilities, equipment, and community services that a client needs to set up a company are provided at no charge. 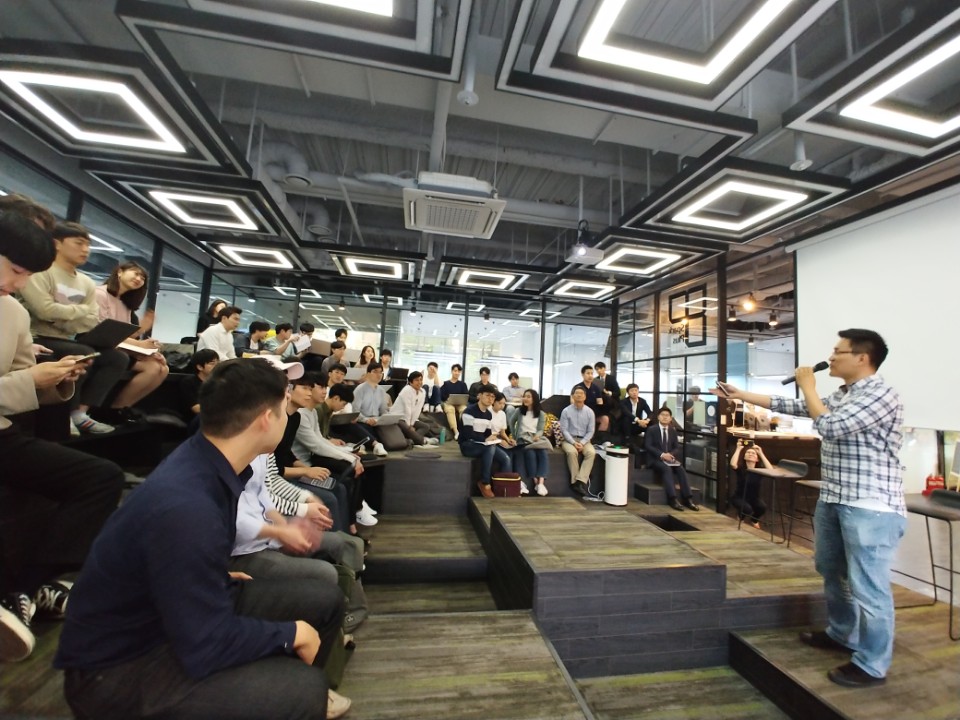 Dano is a weight control and lifestyle company. It grew out of Lee’s own experience of weight gain while she was in college. In researching how to lose the undesired weight, she discovered that false information about diet plans was rampant in the market. Sharing her newfound knowledge and knowhow on social media attracted 30 thousand followers in the first week, a response that was the beginning of her enterprise.

Dano provides four major services: DanoApp, a diet sharing application; DanoShop, an online mall of diet-specialized groceries; MyDano, a coaching program; and DanoFit,  women-only body type workout centers. They are all different services, but all share similar characteristics of offering customer-oriented services. Another Dano representative, Bum Yoon Chung, said that rather than resorting to daring marketing strategies, the firm is trying to find a way that can effectively reach potential customers and turn them into regular customers.

Suk Chul Jeon has invested in both SparkPlus and Dano and discussed his analyses of both companies and the factors that convinced him to invest. Expanding from a market flooded with many diet-related businesses into the service market based on trust, Dano considered how to develop into a platform business. But Jeon said he is concerned about the potential risks to the company in trying to maintain the same one-to-one quality of life habit improvement service when there is a sudden surge in users.

SparkPlus managers thought that the office sharing business has high market feasibility, he said, but there is a risk that industry global front-runners may trigger price competition that would eliminate newcomers. He invested in the business despite such risks, because he is expecting rapid expansion of this business.

“The role of the venture capitalist is to form a storyline with the businesses and pursue each other’s interests, plan, and implement a strategy to coexist and form a win-win relationship,” Suk Chul Jeon said in closing.

Nam Hoon Cho, former CEO of Korea Science and Technology Holdings, spoke about a venture capitalist’s valuation of technology, an enterprise value model, and a career in VC. He introduced himself as a venture capitalists who graduated from a college of engineering. He worked in various companies such as KT, LG Venture Investment, and Innopolis for 30 years. To explain the systems of analysis and valuation of the companies that he has invested in the past, he showed examination and valuation reports by an accounting firm.

Cho insisted that one of the most urgent tasks that the Korean market faces is the activation of the technological commercialization that connects research institutes and the industrial world. “The venture firms that will provide fresh ideas and technology and the VC that will support the growth of venture firms, will provide the driving force for the growth of venture capital,” he said.

Dong Chul Shin discussed the similarities and differences between private equity (PE) and VC. Although PE shares similarities with VC as a stake investor, there are differences such as investment targets, size, methods, means, and administrative methods. Moreover, PE has fewer investment cases, longer investment periods, and a more difficult examination process than VC. The industry is currently growing rapidly. The investment contract price is about KRW 60 trillion, has 188 operators, and 437 funds. And the average size of a private equity fund (PEF) is about KRW 138 thousand million.

He said that the growth of the PEF was possible with the support of government funding. Many firms have gone through difficulties after the International Monetary Fund and governments and finance authorities made huge efforts to modernize the firm ecosystem by encouraging the restructuring of privately led businesses. And during a similar period when firms needed to raise funds for the procurement of their new businesses, investors diversified the portfolios of their investment targets.

Jin Soo Kim posed the question, “Why do we need social welfare?”

“It is because the redistribution of wealth alleviates polarization and help the growth of the society as a whole,” he answered. Then he compared the present state of social welfare in Korean society and its problem to those of other countries. The developed countries with social welfare have balanced participation rates of private sector and public expenditures. Korean social welfare, however, has the biggest portion of expenditures on social insurance program such as health insurance, which indicates the lack of participation rates of firms and private sectors.

“It is true that there are many skeptical views about the utility of a self-sufficiency program, but it is an encouraging signal that 18-20% of the participants are escaping from the poor strata,” Professor Kim said. But he also pointed out the lack of competencies in vocational rehabilitation and self-sufficiency programs and entreated the students to be intensely concern about the issue.

Sung Young Moon, who graduated Yonsei University with a major in economics, told the story of his school days when he actively participated in club activities and; how he came to open and run “Neighborhood Bakery,” which was a small baking business cooperative.

The reasons for the success of the DONGNEBBANGNE, a kind of a cooperative, lies in cost reduction from co-production, distinctive product development, and voluntary learning, along with market expansion from joint marketing. “It is important to clearly state the ‘why,’ the purpose of doing something because it enables voluntary learning,” he said. “Establishing a cooperative union, I fought against the stereotypes toward myself in which people looked at me as a college student who only studied. So, I support students who participate in various activities,” he said in conclusion.

“Think how to manage, rather than to solve social issues. It may be impossible to completely solve those problems, because there are trends that cannot be resisted periodically, economically, and environmentally. So thinking about how to slow down the pace is a role of the individual,” he said. Finally, he told the students, “Patagonia, and Elon Musk’s Tesla all began with small changes. So focus on small details rather than trying to make a huge change.”

Eun Joo Ahn, director of Jeju Olle, introduced the Jeju Olle trail as a socioeconomic case of innovation. Jeju Olle is a project started as the idea of Myong Suk So, who was so inspired by walking along the Santiago trail in Spain that she wanted to create an “enjoyable and relaxing trail.” Consequently, the Jeju Olle trail completely changed the trend of traveling to Jeju from driving to walking.

The project first began by applying the exact same information obtained from the Santiago trail. However, it was completed later by volunteers. So, she thinks of it as “a trail made by trail.” She also thinks that to have sustainability, this project should promote the symbiosis of travelers, inhabitants, and the environment. She mentioned “Clean Olle” as an example. Clean Olle is valuable, she said, because it has a ripple effect not only with environmental beautification but also with a change in the awareness of environmental beautification by travelers and inhabitants. Jeju Olle cooperates with the local businesses and enlarge its boundary to build a foreign business network. 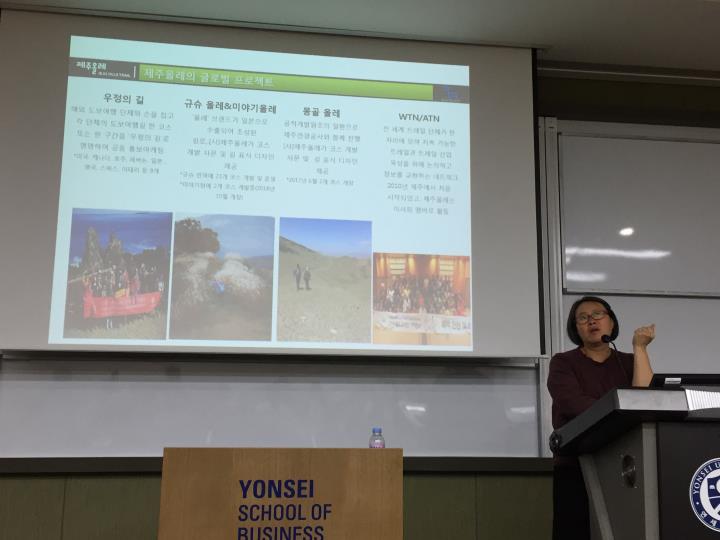 In explaining the sharing economy and periodic strategy, Sang Hyun Lee shared his experience in Airbnb, pointing out “trust” is a core value of a two-sided market. Airbnb consolidates mutual evaluations between the users and the hosts. He also introduced many other platform businesses, saying that sharing economy has a high growth potential as it becomes highly activated.

He also explained that Airbnb is innovating into a service contributing to society beyond the lodging industry. It quickly reflected the requests of its hosts into systems, wanting to provide rooms and shelters for free when the Hurricane hit America. And in the Korean market, through cooperation with the Korean government, it is conducting a project to introduce “Hanok,” which is a traditional Korean house.

Joon Suk Park lectured about the directions and the prospects for the healthy development of the domestic smart home market. He said the SKT smart home service is focusing on cost efficiency by taking on a role as a platform that connects providers and users and working to secure consumers. And he emphasized that SKT smart home itself is a platform that connects everything regardless of differences in telecommunication companies and home-electronics companies. Earlier, their strategy was to drive competitors from the market, but their strategy now is to increase their competitiveness by trying to connect as many providers and users as possible. Last but not least, he said that the SKT smart home, unlike Google and Amazon, cannot provide its own resources but has its strength in understanding the core value of the Korean market and satisfying the needs of domestic users. 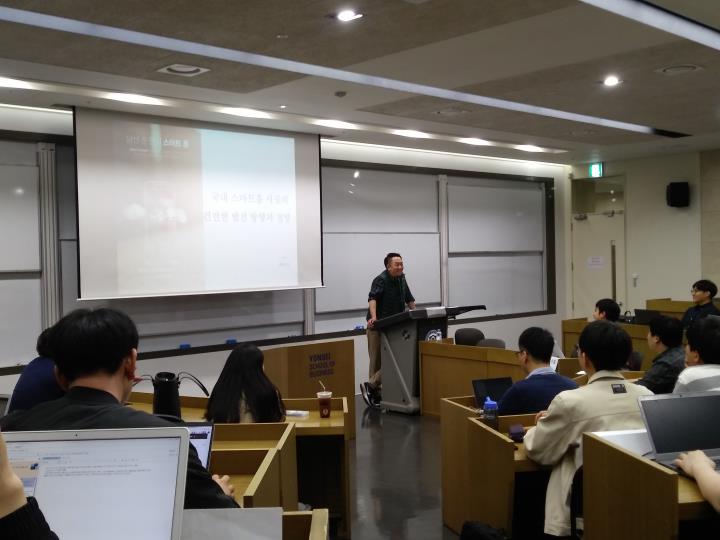 Kwang Jun Ko opened a 3D print modeling session in the Design Garage of the Yonsei Business School to provide students an opportunity to make products with a 3D printer.

In the first session of the class, they made a mug. Kwang Jun Ko carefully showed and explained each step of the construction to the students until they all had made one final product.

In the second session, they made a lamp cover that incorporated sophisticated patterns. When Kwang Jun Ko showed and explained how to use the functions that such complicated processes require, the students carefully followed him, successfully ending up making a lamp cover. 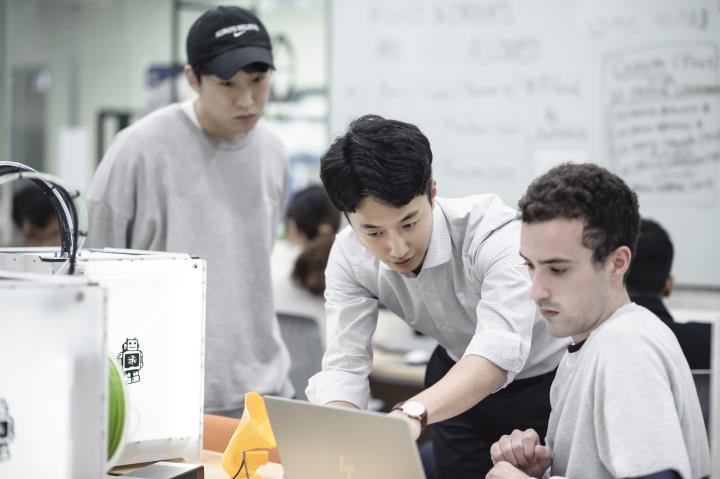