The four colloquium of the Yonsei Business School and the Yonsei Venture, Innovation and Startup Program held during the first semester of 2018 brought innovative insights from a range of renowned lecturers in academic, international organizations, and venture capital and asset management. The colloquium is a continuing series.

Robert W. Palmatier explained why Amazon and other companies are focusing on customer-centered strategies. Professor Ju-Yeon Lee spoke about the influence of customer-centered operation on a firm’s performance.

Executive Director Il-Suk Yoon of Samsung Venture explained the structure of venture capital (VC) as investments made “under the concept of portfolio, which, different from the other general companies, enables it to invest in risky ideas.” He emphasized the formation of networks that gather high quality information because making investments solely by collecting funds is unclear. He added that the core competency of VC is an “insight for the future.” “As it is,” he said, “every employee of Samsung Venture is working independently working with their own insights.”

He continued by mentioning the global trend of VC and the success stories of investments in Google and Apple. The Korean market has weak support in the field of seed capital and angel investments, which are important for the growth of a company in its early stage of development. However, financing channels afterwards are as strong as the American market’s. If the investments now in early stages become stronger, the local VC environment will become as promising as America’s.

Wonki Min, chairman of the Digital Economy Policy Committee of the Organization for Economic Cooperation and Development, said the Fourth Industrial Revolution is already deeply involved in our everyday lives and changing the structure of how we live. ”At a time when the Google AI personal assistant is managing our everyday schedules, machines do not need to progress far to catch up and even acquire some of the cognitive ability of humans,” he said. “As Uber completely transformed the automobile industry, such technical development will bring huge changes in both economies and societies. He also mentioned that just as the digital economy is understood as a type of ecosystem, a ?similar? understanding about technical development is needed. “The digital economy only remembers the winner,” he said, pointing to a structure of “‘winner takes all,” which needs to be solved by the efforts of future governments and consumer groups.

He also mentioned the issue of personal information and security. “Unlike the fossil fuels that led the Industrial Revolution of the past, the value of data increases as it is used,” he said, emphasizing that we must focus on the incremental growth of the value of data, which is classified as an intangible asset, and its huge influence on the economy. Therefore, he said, as time goes by, the issue of personal information and security becomes important, and Korea is currently using the General Data Protection Regulation established by the European Union.

Wonki Min is considered a leading expert on the Fourth Industrial Revolution and since 2002 has worked in many different international organizations in the fields of information and communication services. 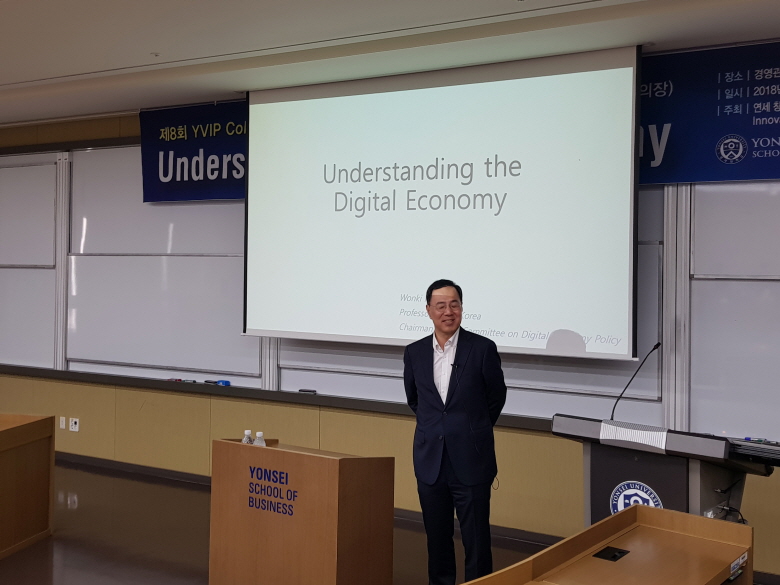 » The 9th Lecture: ‘Man and Machine – How Big Data and Machine Learning Are Shaping the Future of Investing’ by Sung Chan Kim (12 June 2018)

Executive Director of BlackRock Investment and Financial Management Sung Chan Kim lectured about how AI and big data influence investors on Wall Street. “Big data” refers to huge amounts of data sets. It is widely believed, he said, that more data means higher accuracy and better solutions. But in many cases, among these wide ranges of data, only limited amounts are actually needed. Thus, high quantity does not guarantee good results. This shows the need for machine learning in which a “machine itself learns algorithms from big data to predict the future.”

Big data and machine learning on social media analyze a company’s evaluation and even count the number of positive and negative words used during meetings and conversations to make a decision on investments.

Sung Chan Kim studied theology for his bachelor’s degree and finance for his master’s and currently works in a BlackRock Investment and Financial Management on Wall Street.