The 26th and 27th YSB After School (A/S) Special Lectures aimed at ongoing education for YSB’s alumni were held November 28-30, respectively, at the Yongjae Auditorium in the Business Building.

Professor Ho Uk Lee of Management delivered the 26th lecture on the topic “Survival in the Age of Extremes: Overcoming Uncertainty and Becoming Great Through Successful Management of Change.” 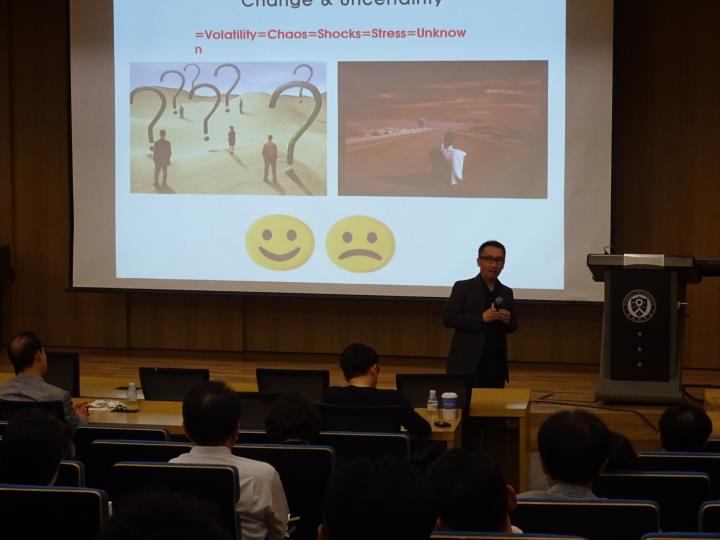 Professor Lee described “change” and “uncertainty” as the two hot topics in management studies, and emphasized the need to change our frame of thought — so that we see uncertainty in a positive light – in order to respond effectively to uncertainty. The ultimate goal of management, he said, is to minimize the adverse effects of change and maximize its positive effects. To do this, management must take scenarios of both success and failure into consideration in its preparations.

Professor Lee emphasized the importance of understanding the Dynamic Capabilities Theory when preparing for both success and failure in today’s fast-changing and radical world. He presented three key insights on Dynamic Capabilities Theory. First, form temporary and multifaceted strategies continuously. Second, organizational structure and capabilities must precede forming strategies, and, once structure and capabilities are in place, continue internal confrontation and debates while collecting information. Third, the ability to think and move in time, or a proactive response to the flow of time, is the most important ability in strategic management.

Professor Chang explained the concept of trans branding, which refers to changing a firm’s brand. Just as golfers’ strategies change according to the strength and direction of the wind, Trans Branding responds to the wind of economic environment, he said. He emphasized that firms will die out just like the dinosaurs unless they learn to evolve with the fast-changing times. He presented the “2F: Flexible Fit” method to identify areas that need change and areas that should be kept by integrating a trans-paradigm and branding.

Professor Chang also explained the meaning of trans by using “Call Coho” as an example. “Call Coho” received the Best Foreign Short Award for the 2015 December session of the Los Angeles Independent Film Festival Awards that Professor Chang produces. “Evolving is the only way of surviving for firms and management alike, just as it is for creatures,” said Professor Chang. “Trans branding can be achieved when one focus on areas deserving of attention and passion while avoiding dissipation.”