As part of its ongoing celebration of its hundredth anniversary, Yonsei School of Business is hosting an Entrepreneurship Lecture Series in conjunction with Yonsei Enterprise Support Foundation. In an era in which a creative economy is a key topic, listening to multiple successful entrepreneurs is considered a way to not only help students preparing for start-ups but also to provide insights to students whose ambitions are to become executives. Paypal founder Peter Thiel opened the series on February 24; since then two others — by Park Eun-kwan, president of Simone, and by Blake Mycoskie, founder of TOMS Shoes — have been presented, with two more in the series scheduled for later in the year. 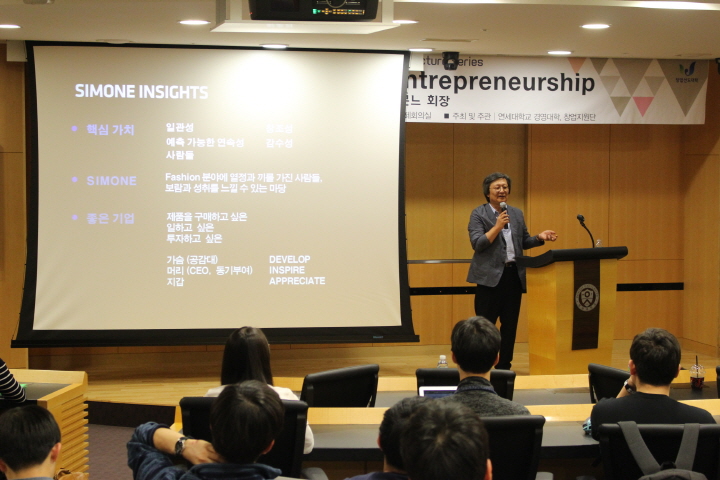 » Why Not Us? Why Not Entrepreneurship? by Park Eun-kwan President of Simone

Park explained instances in which despite his handbags’ higher quality than those from the U.S or Italy, he got rejected in favor of better known brands. To overcome this problem, he had to prove to his clients the growth potential of the Asian market. “It is important,” he said, “to foster self-confidence to say, ‘Why not us?’ to clients in an early-stage start-up market that has low brand loyalty. To make creativity and innovation a realization, it is imperative to become a specialist in a unique field first, and before becoming an entrepreneur, it is better to first have a professional spirit.”

Heo Seung-min(Entering class of 2012, Business major), who listened to the lecture, said, “I usually had a lot of interest in start-ups, but after listening to President Park’s lecture, I have a lot on my mind. Now I believe that I should work hard to become a specialist in an area I wish to succeed in.” Seo Yae-rin (Entering class of 2011, Business major) said, “I listened to the lecture because I had an interest in the fashion industry, and I learned that Simone and Korea play an important role in the foreign fashion industry. Listening to the lecture provided a stimulus, and it was a great chance to think about the mindset of a true entrepreneur.”

Blake Mycoskie is the well-known founder of TOMS Shoes who built a global brand on the idea of giving a shoe-less child a pair of shoes for every pair of shoes bought. The lecture was held on May 19 in the auditorium of the Engineering Building.

He first described of how his company originated. During his vacation in Argentina, he became interested in donating shoes after observing a community service give secondhand, donated shoes to children of poor families on the outskirts of a city. When he realized that the children who received the shoes were now able to attend school to receive an education, he was moved and decided to create TOMS Shoes. As TOMS’ story of donating spreads, revenue continues to soar.

Blake Mycoskie said a company needs to keep three points in mind to be sustainable: First, share a brand story with customers that allows customers to take on the role of an employee who sells products through sharing; second, improve employees’ working skills through motivation; and, third, cooperate with professionals in diverse fields to learn from them and also gain their support. After the lecture, there was a discussion with the CEO of Tree Planet, Kim Hyung-soo, and Lim Dong-joon, exclusive distributor for TOMS KOREA, on potential philanthropic activities. CEO Kim Hyung-soo proposed finding and running activities that could share happiness with many people. Lim Dong-joon, based on his belief in himself, urged that we take more interest in others.

Cho Seung-hee (Entering class of 2014, Business major) said Blake Mycoskie has long been her role model and his lecture was valuable to her in realizing how helping others is such a cool job.