As part of its centennial celebration last year, Yonsei School of Business surveyed its students to learn who among the school’s alumni they would most like to meet. The result was three special lectures featuring actor and broadcaster Sangjin Oh, National Assemblyman Jonghoon Kim, and  Juyeol Lee, governor of the Bank of Korea.

In delivering the first lecture (Sept. 16, 2015), Sangjin Oh (entering class of 1998, Business major) said, “It’s an honor to meet with junior colleagues in the new building. I am overwhelmed with emotion as I never have thought that I would return to school as a speaker after graduating.” Instead of sticking to a lecture format, he focused on answering questions from the students.

Sangjin Oh joined a broadcasting station as an announcer in 2005, but expanded his career into being an advertisingmodel and actor. He was asked which profession made him happier. “I am happy in general. However, I do have many concerns. Hence, it is essential to consider both the pros and cons when deciding on a profession. What seems fancy isn’t always great inside. Famous people often get hurt by abusive comments on the Internet and go through lots of distress. Fear looms when their latest work fails to be better than than what went before,” Oh said.

Reminiscing about his university life, he said, “Junior colleagues these days face great competition and cannot enjoy their leisure time freely. There’s no time to relax in general. As a senior member of society, I feel sorry for not being able to give composure to posterity.” In concluding his remarks, he advised students to take time despite their busy lives to make enjoyable memories. 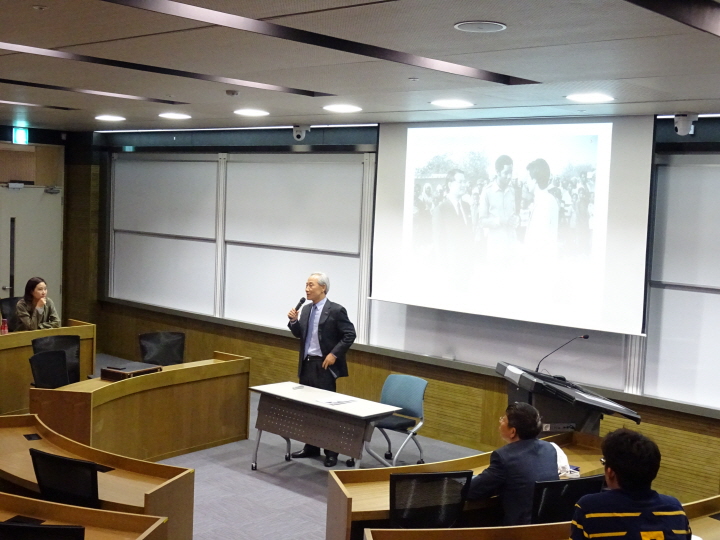 National Assemblyman Jonghoon Kim (entering class of 1970, Business major), a member of the Saenuri Party, spoke Oct. 6, 2015, in the second of the lectures. He played a critical role in the Korea-U.S Free Trade Agreement. He connected with students who may face unemployment by recalling his hardships as he studied in a temple to prepare for the Foreign Service exams. And he got big laughs when he told them that because of poor attendance his name was missing from the list of graduates when he attended the graduation ceremony after passing the Foreign Service exam.

His lecture topic was “An Era of Unlimited Competition and Unlimited Cooperation.” He said he realized the importance of having such a process, instead of a leader or government building national wealth on the life of the nation’s citizens, when he was working at the embassy in Bourkina Fasso in the ‘70s. He asserted that in the era of warm capitalism after 2009, government should be downsized yet still be efficient and flexible and also should pursue symbiotic developments with the public sector, including corporations and households. He explained the importance of having benevolence, in the terms of the spirit present in the French Revolution, permeate the economy, specifically mentioning the North European countries that provide unconditional welfare to underdeveloped countries. 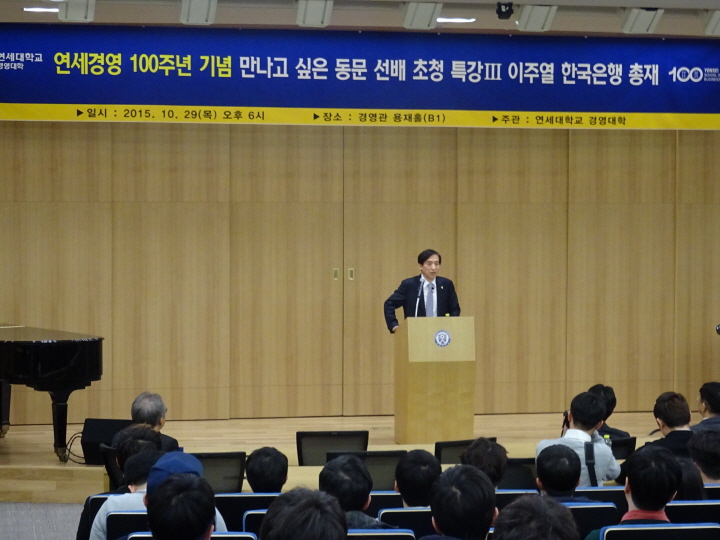 Bank of Korea Governor Juyeol Lee (entering class of 1970, Business major) said in his lecture on Oct. 29, 2015, that he was amazed at seeing the completed Baekyangro, the main thoroughfare through the Yonsei campus, then spoke to the students as a mentor. He did it, he said, because it was regrettably a role that was missing from his life as a student. Looking back on his university life, he said he also regrets his lack of interaction with students in other majors and other universities..

His first advice as a mentor was to urge students to develop expertise by acquiring knowledge in their major, add depth to their thinking through study of such foundational disciplines as philosophy and science, by reading the classics, and by developing thinking skills through making a habit of analytical thinking. Second, he encouraged the students to be humble and loyal to the organizations they belonged to. Third, he emphasized their need to remain flexible and adaptable to change by maintaining a five- to ten-year perspective. Lastly, he asked the students to take their analytical thinking skills with them when they leave academic life and enter society..

Lee’s lecture and the students’ subsequent questions lasted for about an hour and a half, with Lee commenting on the high quality of the students’ questions on meaningful issues. He said he is concerned about the current economic situation with problems of unemployment worldwide and about how it is for current students to enter society. However, he said, “It is important to think positively as opportunity will certainly come to those who are prepared.”