Yonsei University School of Business held its 21st and 22nd YSB A/S special lectures on October 26 and November 26, 2014, in the Daewoo Hall. This lecture series is held on the last Wednesday of each month during the school semester and is consistently popular with our alumni. 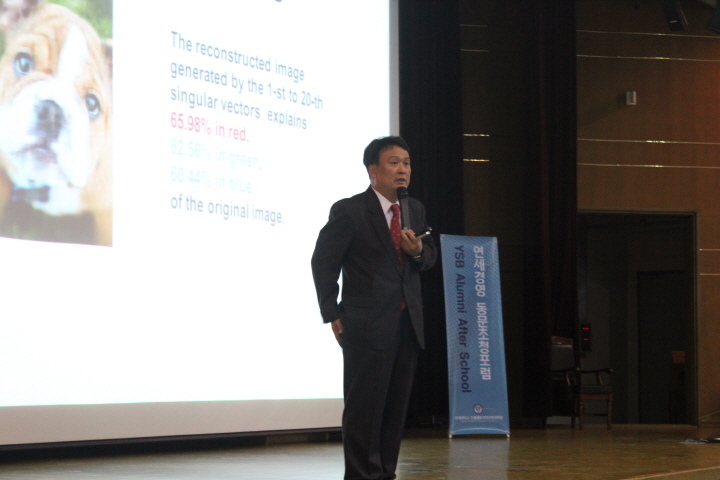 » 21st Lecture, “Something Invisible” by Professor Hak-Bae Lee of Applied Statistics The lecture held on October 29 was on the topic of Big Data and statistics. Professor Hak-Bae Lee began his lecture with, “although there has been a recent growing interest in Big Data, ironically, it’s mostly the case that people misunderstand the statistics. I hope people will correctly understand statistics through being able to spot the misused statistical indicators in newspaper articles, papers, and reports.” Throughout his lecture, Professor Lee reviewed actual cases of misinterpreted correlation-coefficients and instances of incorrectly analyzed data. He said misinterpreted statistical indicators shouldn’t be accepted unconditionally just because they are considered Big Data.

One of the alumni who attended the lecture said, “I’ve heard the word ‘Big Data’ many times. However, I never really understood what it meant and felt like it was grasping at floating clouds. The professor explained with easy sources, such as actual newspaper material, making it easy to understand. The professor seemed to understand the position of the hands-on workers, which made the class more practical.” Furthermore, Ah-Ree Yoo, (entering class of 2011, business major) an undergraduate student, had wanted to know about Big Data, but was concerned about understanding it, because she hadn’t taken a statistics class. She said she was happy to be able to have the opportunity to attend a lecture from  professors in  different departments. 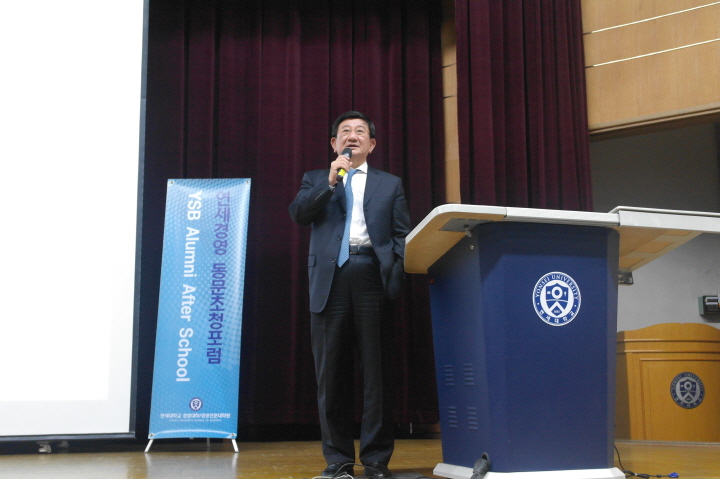 » 22nd Lecture, “2015 Global Environmental Change and Corporate Response Strategy’” by Professor Young-Ryeol Park of the YSB The 22nd lecture held on November 26 was the last 2014 A/S lecture. Professor Young-Ryeol Park explained, one by one, the main issues of 2014 Global Business-Economics, the 2015 outlook, and the strategies of companies in preparing for these events. He analyzed the effect of the halt of quantitative easing, changes in the energy policy of the US, the Chinese real-estate bubble, and economic depression in the Eurozone. The lecture and especially good response because the Korean economic situation was viewed from an international perspective, including looking at the decline in the Korean total export growth rate in relation to slowing growth in China.

He emphasized “the importance of 2015.” He further emphasized big changes in the global economy, with the US economy’s slow recovery as the main issue, and predicted a paradigm shift from an economy led by emerging countries, after the 2008 financial crisis, to a developed-country-led economy. Also, he called the companies’ attention and emphasized the economic outlook of Korea’s not-so-helpful neighboring countries, including competitive restoration of the US as a global leader, Japan’s weak yen policy to regain export competitiveness, and the steadily slowing growth of China. Professor Park stressed the “HUG strategy of “not ostracizing the neighboring countries as a countermeasure, in this era of crisis. He stated that out of all moments, this moment was most important for change and innovation in companies, and ended his lecture by declaring, “2015 will be the year of change from hardware to software.”

Jong-Seop Jeon (BBA alumnus, entering class of 1991) said, “It had been long time since I’d taken a lecture in school, and I realized that it’s a period requiring a lot of thought. Hearing the lecture, in itself, gave lots of motivation in various ways.” Also, Ye-Rin Seo (entering class of 2011, business major) said, “Often, I’m satisfied beyond expectation every time I take an AS lecture. It’s a shame that the 2014 AS lecture has ended, but I hope that better and more interesting lectures will continue in 2015.”