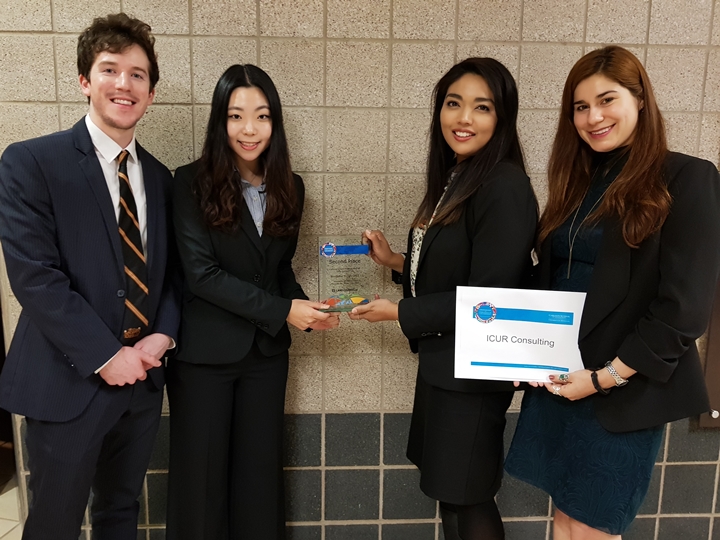 [Thomas Merckens (from left), Seol Jeong Yoon, Carolina Moh and Melinda Courtney  were members of the YSB GMBA team, one of six finalists selected from competitions held in 31 countries.]

This year’s Carlson case competition was supported by Land O'Lakes, a major U.S. food company, and themed as “‘HR program development for people new in the job market.”

Every team visited Land O'Lakes headquarters on November 9, the starting date of the finals, to understand the business and then had to plan and submit solutions by midnight of the next day. “Communication between teams was restricted as well as any Internet connection. We had to rely on only the given information,” said Moh. “With such strict rules of competition, we came up with this solution solely based on our ideas.”

The Yonsei GMBA team’s proposal for a student apprentice program and an accompanying detailed budget bill drew favorable comments. Moh said, “There are a number of young people who give up on going to college due to high tuitions in the U.S.  I believe the judges recognized the originality of our HR program through which a company hires and trains these young people as apprentices, supporting college tuitions for them to pursue a college diploma.”

Moh and her team members spent two months together as a team. She recalled, “We had a very different perspective from that of a team from the University of Minnesota on the same issue. Both of them were innovative in their own way. The judges split over the final result until the last minute.” Even though the competition was difficult, she said she appreciated experiencing such a problem-solving challenge with great team members in a short period. She also encourages other students to participate in the competition next year, saying, “Never be afraid to face a challenge and set a goal of winning first place next year.”