Entering freshmen of the Yonsei School of Business and the College of Commerce and Economics were welcomed in March by their faculties and introduced to college life with straight talk from alumni who also offered mentoring advice as part of the 11th anniversary of such welcoming and mentoring ceremonies aimed at the academic success of the new students. 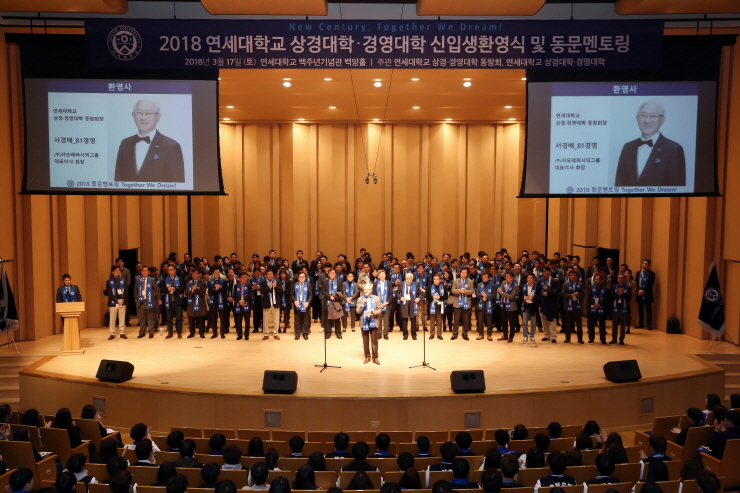 The event consists of three parts — a welcoming ceremony, introduction of the mentors and their roles, and a main mentoring event. The first two were held in the Yonsei Centennial Concert Hall and the third in the K-Turtle Restaurant in Sinchon. 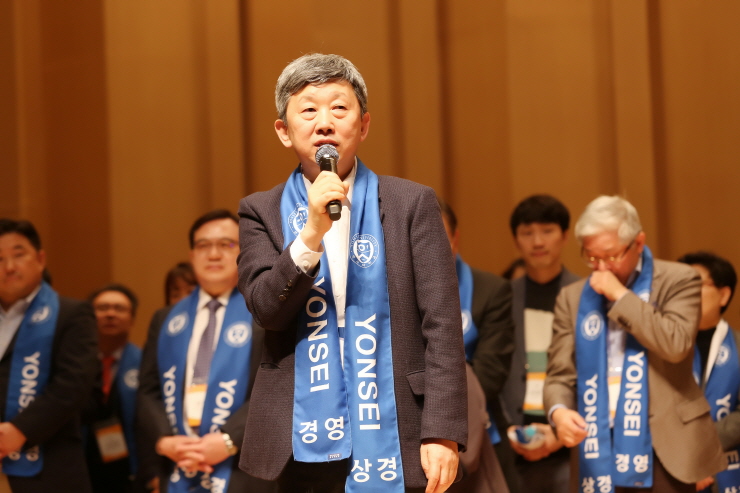 Dean Young Ho Eom of the Yonsei School of Business opened the first session. “When you all graduate,” he told them, “I want all of you to have left behind the person you are right now and graduate as a mature person. From now on, you should concentrate on discovering what is deep inside of you and focus on developing and transforming yourself.”

Dean Eom was followed by Professors Su Bin Im of marketing, Saeyeul Park of finance, Dae-Hee Yoon of accounting, and Ji-Hyun Kim of management who introduced each major of the business school with brief welcoming remarks. Associate Dean Daesik Hur surveyed the curriculum, scholarships, and global programs important for students to know for the coming semesters. Next, members of BizYON, a student public relations club, conducted a five-class-quiz show to provide fun and excitement for the freshmen. 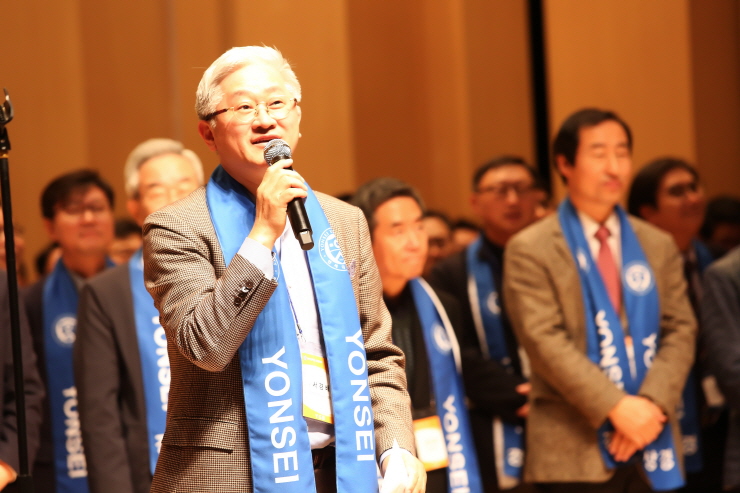 The second part of the event was led by announcer Sang Jin Oh (entering class of 1998, Business). At this point, the freshmen of the College of Commerce and Economics joined the event. And then the mentors entered to a standing ovation. “Welcome everyone to being part of Yonsei — I wish for you guys to fly higher and dream bigger,” said Kyung-Bae Suh, CEO of the AmorePacific Group (entering class of 1981, Business).

Next, the mentors who regularly participate in the event came onto the stage. “The strengths of YSB are creativity and diversity. I want everyone here to cultivate these values and contribute to the future of society,” said Su Kil Kim, CEO of JTBC (entering class of 1974). “I am confident that this mentoring event will provide everyone here with steppingstones to be a good mentor in the future,” said Won Jung Shin, managing director of Samsung Securities (entering class of 1986, Business). Ga On Kim (entering class of 2011, Business), who participated in this event in 2011, participated this year as a mentor. She told the freshmen she hopes they will return to this event again in four years as mentors.

Next, the mentors moved to each table and met the freshmen. Together, they participated in a series of cheers led by Akaraka, a student cheerleading group, to end the second part of the ceremony. 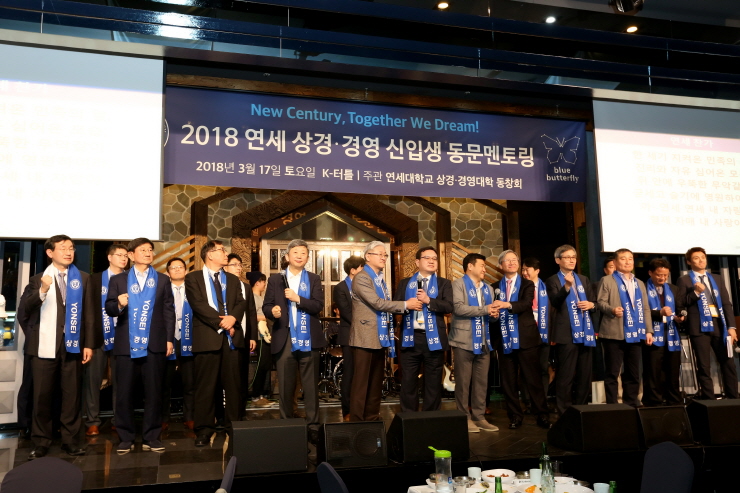 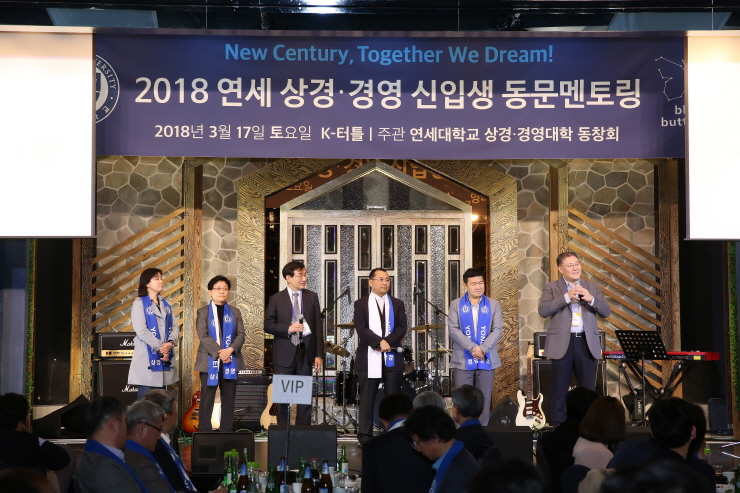 Asked the three most important things to do during college, every mentor gave a different answer but all shared common threads of the importance to read, study hard, make friends, and have a passion for life. They advised the students to never stop challenging as they go out to the world, and to keep on learning by participating in many different activities. And to the question, “How has YSB helped you in the society?” Il Soon Im remarked that during her college years women had limited opportunities and her entering class had only four women. “If I had not graduated from YSB, I might not have a single step in society,” she said, implying the major influence YSB had on her career. 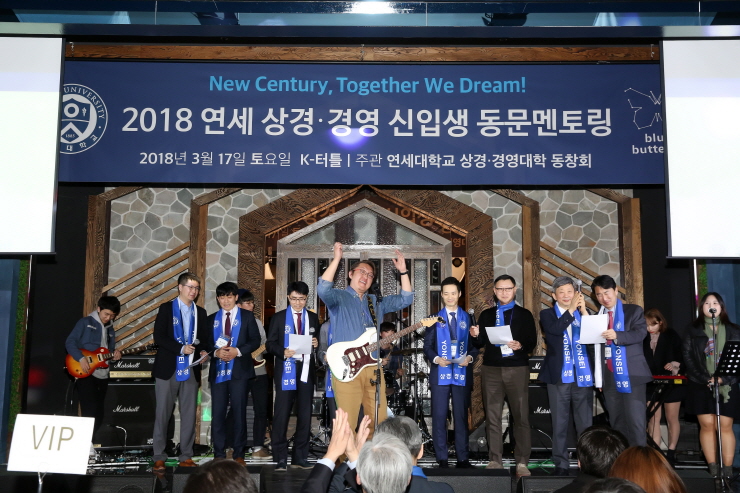 There was a special performance conducted by “Sonagi,” a rock band of Yonsei University. Professor Sung Joo Bae of Operations Management, a former member, sang a song to the mentors with a thankful voice and then with a welcoming voice to the mentees. Next, all the professors came onto the stage and sang a song called “Let Us Go On a Trip,” a famous song by famed Korean pop singer Yong-pil Cho. All the students stood and sang along.