The third Lee Han Yeol Academic Seminar, which commemorates the YSB student who died in 1987’s democracy movement, was held via online webinar on Nov. 5 at 6 p.m. on the theme of "Youth Activities for New Values."

Kil Soo Suh, Dean of YSB, welcomed the participants, saying, "We would like to take a step further from the two previous academic seminars, which highlighted the historical significance of Lee Han Yeol, and shed light on the real-life challenges faced by the youth of this era." He added, "Different generations have different tasks to complete, and different spirits to pursue; however, our eternal task is to make a better world." He said, "I hope this academic seminar will help us make a better world."

At this academic seminar, Max Han, CEO and representative director of Sopoong, presented on the subject of “Fire and Prometheus, an Invitation to Social Ventures”. Then E-loom activist Yoo Na Hwang presented on the subject of “Feminism asking the new world”. The discussion session was attended by four panelists, including Myunghee Lee, impact review head of the Band Foundation, Chae Eun Lee, Chairman of the Youth Union, Hee Jeong Choi(Cultural Anthropology, entering class of 2018), Director of the Human Rights and Living of Yonsei University Student Association, and Ji Young Heo(Philosophy, entering class of 2018) a member of Yonsei University's student club 'Yeol’s Step’ pursuing the Youthful Patriot Lee Han-Yeol’s spirit..

Presenter Max Han introduced Greek mythology "Prometheus and Fire" and interpreted, "The reason why Prometheus brought fire to humans even though he knew that he was bound by it was because he sympathized with human suffering." He likened the social innovators to "today's Prometheus" who solves social problems with new ideas and methods. He stressed that companies are supposed to find their mission from the society. The true purpose of economic growth or the main function of wealth is to connect people to people. Han said, "Social innovators are the ones who can make this possible.

Corporates nowadays are playing the role of "fire", as the majority of today's innovations come from the business world. In addition, he used the story of the rescue of Prometheus by Heracles, the son of Zeus and the most powerful human being, to emphasize the importance of bringing in other powers to actually solve social problems. This process is called Impact Investment. He finished his presentation by pinpointing, "In the '70s, labor activist Tae-il Jeon did not realize his dream due to lack of capital, but now there are impact investors who actively seek to solve social problems based on empathy."

Activist Yoo Na Hwang works in E-loom, an anti-prostitution human rights initiative that supports counseling for victims of prostitution; meanwhile recognizes and studies this issue as a social structural problem. While engaging in activism, she found that the perception of prostitution is different depending on gender. Also, while asking 'Why am I a woman?' in her master's courses, she realized that our society is dominated by social norms that we cannot explain ourselves. Feminism is about changing "me", the relationships around "me", and the world around "me". Usually, people would think that an activist should sacrifice him or herself for a cause, but Hwang emphasized the importance of focusing on "me", because one has to know thoroughly about oneself and the relationships around in order to change the world. 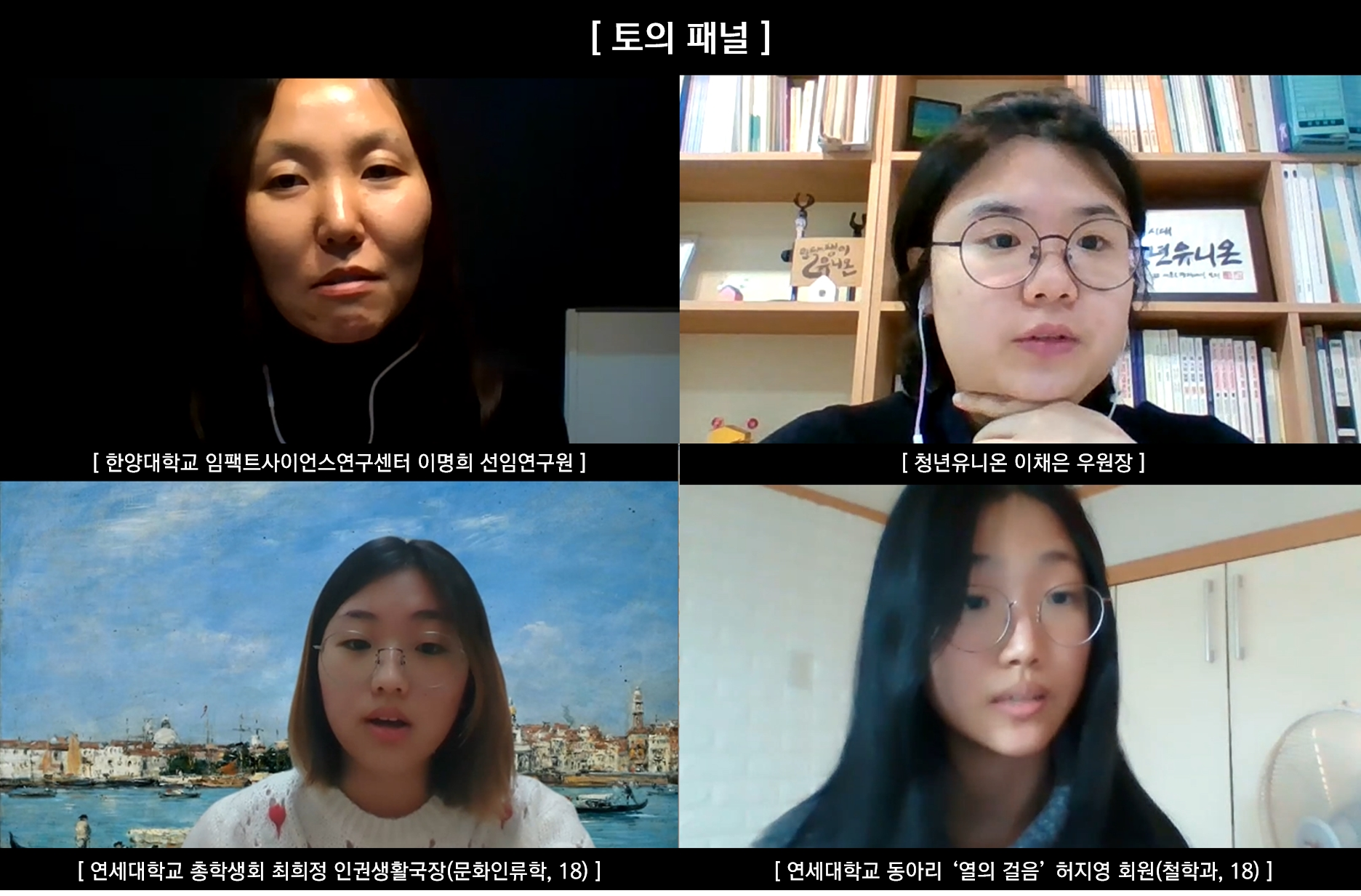 At the panel meeting, Researcher Myunghee Lee said, “For social change, changes in the ecosystem are necessary." He further asked, "What kind of activities do you need to do to bring people together for things that you cannot do alone?" "I feel difficult because the emerging issues such as the coronavirus, climate crisis, housing issues, and fertility issues are creeping up faster than they are solved. Nevertheless, by establishing the Impact Alliance, we discuss what policy-related actions should be taken to resolve social issues. In addition, Max Han talked about the program "Inspired", which invites young people who want to live independently and gives them a break for 2 nights and 3 days. “It is because we can go to the next level only when we have adequate rest and charging; the sense of solidarity that builds up in a casual and fun place is also very necessary for activism,” said Han.

Chairman Chae Eun Lee is also deeply interested in feminism while campaigning for labor activism. She asked, "Can women engaging in prostitution be called workers? I personally think it is exploitation. How should we define prostitution in the realm of exploitation and labor?" Yoo Na Hwang, the presenter, answered, "All should be used to define prostitution. What is more important than the definition of labor, exploitation, or employment is that women are required to suffer discrimination and violence in the process of prostitution. Even if you want to have short hair, you just can't. Things like this are discrimination." "It is more critical to think about why is there so much prostitution in Korea society and what society should do to diminish prostitution," she emphasized.

Panelist Hee Jeong Choi asked for a detailed explanation of the investment from the gender perspective. The concept arose in the United States around 2005. It started from the consensus that gender inequality exists since the beginning of the investment process. Max Han said, "In 2018, Sopoong introduced the concept of investment from a gender perspective for the first time in Korea. "Women are getting limited access to capital in many facets; however, since there is a change in perception, the investment environment for women will improve in a few years," he explained.

Finally, panelist Ji Young Heo asked the two presenters about sympathy, "How do you transfer sympathy to power and take action?" Yoo Na Hwang suggested "meeting colleagues who share the same values with me". Max Han then advised, "It is difficult to bring great power into practice from the beginning, so we test the possibilities through small attempts."