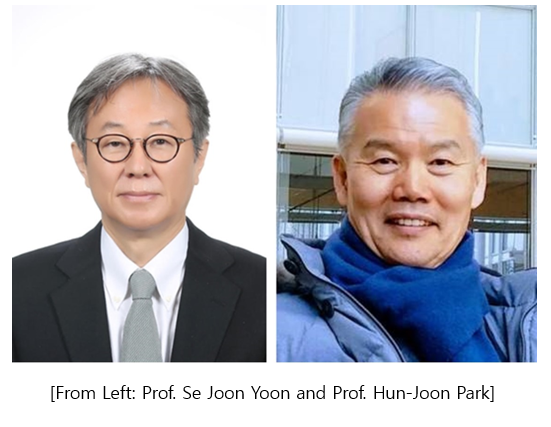 YSB professors Se Joon Yoon and Hun-Joon Park of Management retired at the end of August and were appointed emeritus professors as of the second semester of 2020.

Professor Yoon, a leading researcher and educator in human resources and organization in Korea, has published numerous papers in world-class journals such as “Organization Science,” the “International Journal of Human Resource Management,” and “Organization” since 1992, when few Korean scholars published in the world's best academic journals. In the 1990s, he worked with other Korean scholars to establish the Korean Academy of Management, an international-level academic society in the field of human resources and organization. He also played a leading role in launching the “Korean Journal of Management.” In the 1990s, he actively participated in social activities and worked at the National Association of Professors for Democratic Society, contributing greatly to the democratization of Korean society.

Starting with lectures on organizational behavior, Professor Park became a leader in innovative management education research, including organizational games and empirical practice. As a researcher, he pioneered various research fields, including strategic negotiation and deal-making, social enterprise and innovation, corporate social responsibility, and family business management. He also has won numerous awards, including best paper awards from the Korean Academic Society of Business Administration and from the Korean Academy of Management. Moreover, he has provided consulting and corporate management education to the director of research support at the Korea Research Foundation, business owners, and professional managers

Professors Yoon and Park will continue to contribute to research and education for their juniors after retirement.