The series of lunch forums hosted by Yonsei Business Research Institute of YSB and YSB BK21+ on the Fourth Industrial Revolution closed out the semester successfully.

The continuing series began in 2017 with the goal of promoting interdisciplinary research and collaboration between industry and universities on the essence of this revolution, its progress, and future development and to propose to Korean firms a management paradigm suitable for this new trend.

» 11th Forum, ‘The Transitional Nature of the Fourth Industrial Revolution’ by Young-Pil Park 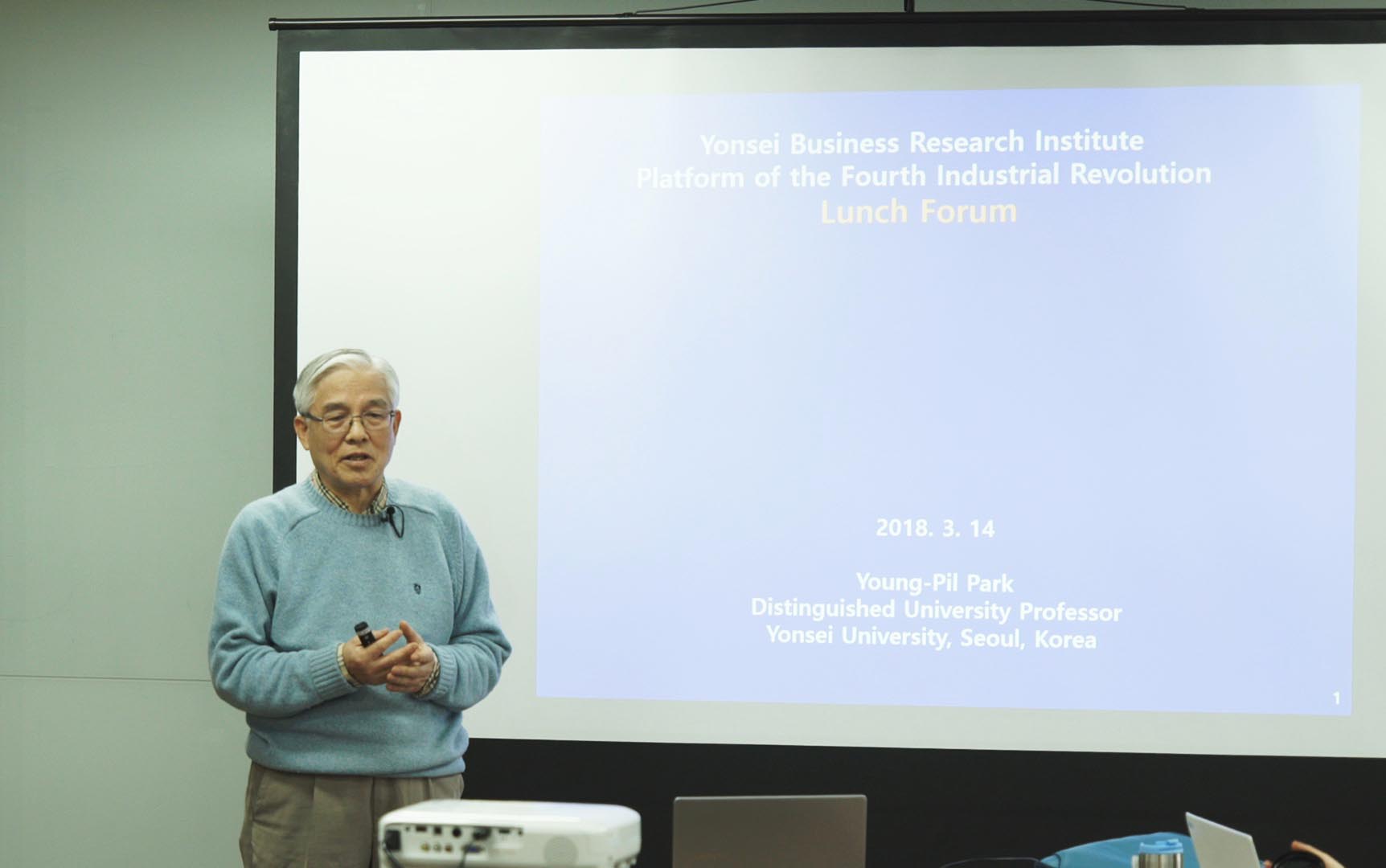 On March 28, Sung-Jun Park, director of the Blockchain Research Center of Dongguk University, called artificial intelligent (AI) and blockchain as two of the most important technologies of the future. Since its birth, the definition of blockchain has gone through constant development. Beginning as a decentralized ledger, the blockchain has progressed beyond the concept of the P2P trust network such as bitcoin and the trust business network and furthered the concept of a smart contract operating platform. It is ultimately a second Internet as well as a value Internet.

Plus, because the blockchain computer is a one huge global computer, there is no such concept as a network. He predicted that the TTP (Trusted Third Party) would fail and be replaced with a new platform that will completely change the existing business model. 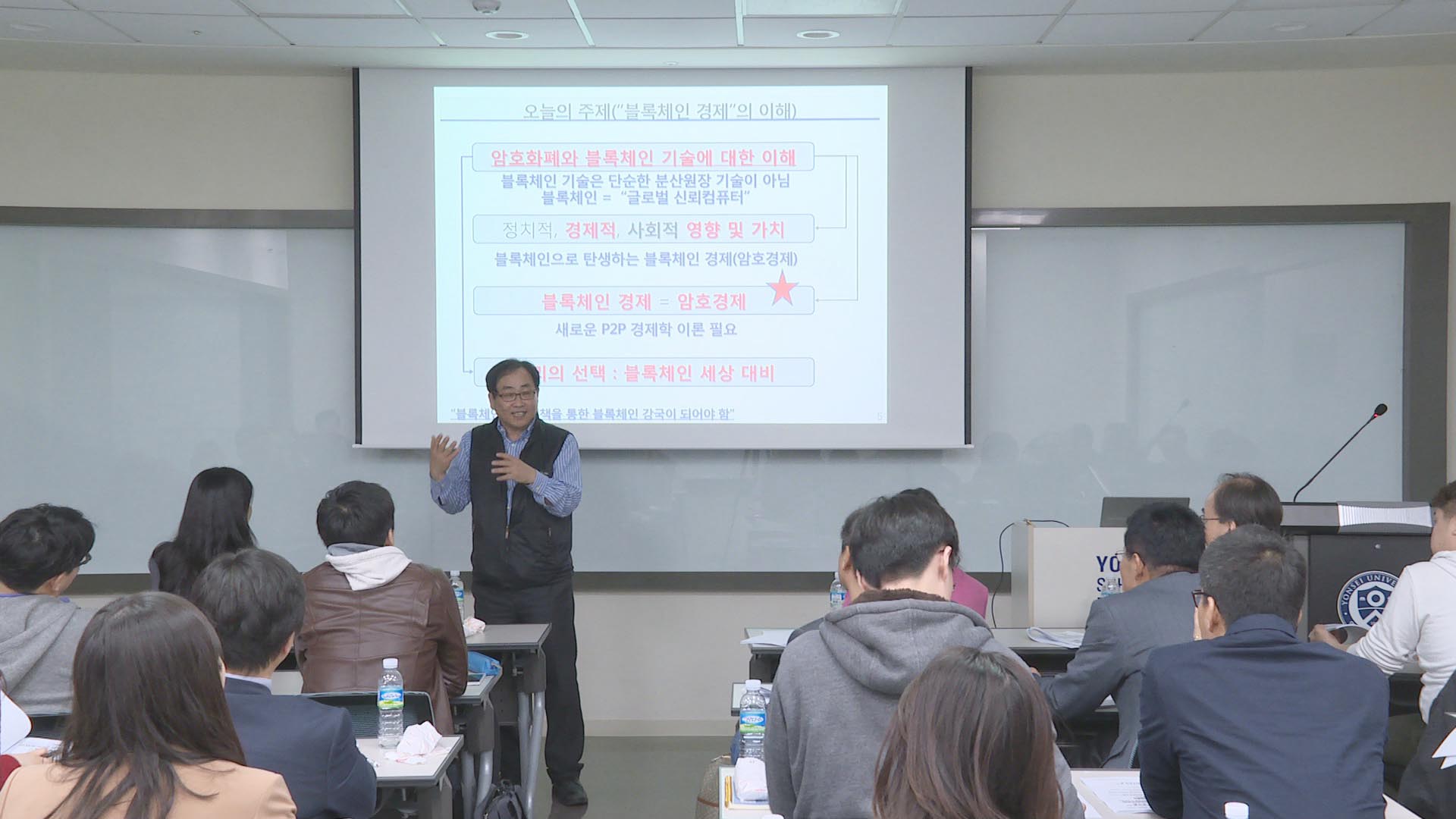 On April 11, Professor Sangkyu Rho of Seoul National University, spoke on “What Blockchains Dream,” addressing the advent of a new form of companies based on blockchain. He also explained the concepts of smart contracts, decentralized organizations, and bitcoin.

The highly efficient existing form of decentralized organizations based on smart contracts is predicted to weaken the structures of previous organizations and governments, he said. And by listing the components and the pros and cons of the advent of new forms of companies and various smart contracts, Professor Rho emphasized the importance staying informed about the clear divisions between the territories of humans and smart contracts. 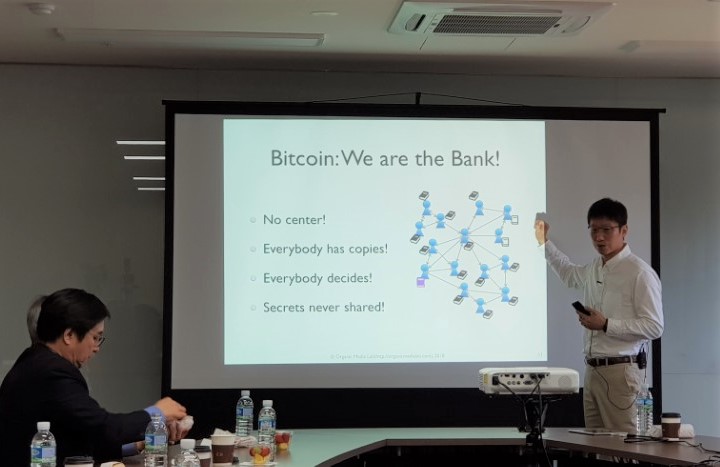 » 14th Forum, ‘The Utilization of Blockchain and Smart Contracts’ by Jong Hyun Kim

Jong Hyun Kim, professor of Cybersecurity at Ajou University, explained at the April 25 luncheon how best to use blockchain technology and smart contracts. He also elaborated on the evaluation of the characteristics of such systems and technologies and on the history of Information Technology. He also defined and explained the decentralization, transparency, and security that are characteristics of blockchain. He also presented the definitions and applications of crypto-currency technology and emphasized the strengths of public and private models that differ from blockchain.

He closed his presentation by introducing three types of new business models based on blockchain – information verification, information sharing, and P2P-based sales.

Dr. Jae In Kim from the Institute of Philosophy at Seoul National University, told the May 9 lunch session that AI is something that replaces tasks that require human brains. Currently, AI is based on a deep learning process but henceforth, because the codes will go through changes, there is uncertainty about how AI will progress. However, he said, AI has the potential to overcome “memory,” which is its biggest limitation. Today, humans are the a main agent, he said, but we must contemplate how AI will change the world.

On May 18, Sung Chul Kang, director of the Robotics and Media Institute at the Korea Institute of Science, explained what will happen in medicine and healthcare when AI and the medical health services combine. Although the role of robots will increase operating rooms patient rooms, and hospitals, the most important change will be in the fusion of AI and biomedical engineering. The boundary between the abled and disabled will disappear and a new concept of augmented humanity will rise. He added that a robot is an existence that feels, thinks, and behaves just like humans. He ended his talk by saying that how robots are made and implemented should be done with much philosophical thought.

On May 23,Sang Ki Han, CEO of Tech Frontier, began his speech by saying a middle ground between law and commerce needs to be found for AI and, on the technical side, the problem of deep learning needs to be solved. The AI disseminated in our everyday lives so far, he said, is a voice recognition speaker, and there is a long way to go in terms of technology. He emphasized that the social issue of AI is about whether the evaluations for algorithm and data are reasonable. “The ethical issue about AI is often brought up, and its judgment should be made by human, not by technology, because for now, it is impossible to train AI to possess an ability to judge moral value,” he said.

» 18th Forum, ‘An Economical Understanding of the Development of Open Source Software’ by Namhyung Lee

The last lunch forum of this semester was held of May 30. Professor Namhyung Lee from the Korean National Open University explained that Open Source Software (OSS) refers to the interaction among developers, licensees, and the community, and its technical definitions are free distribution, source codes, secondary works, and the lack of differentiation among licensees and disciplines. From an economical point of view, what we must focus on when looking at OSS is that it is not competitive when the marginal cost of the production of source code is 0. Asked if OSS will seize the market, he responded that as long as its technology is on a similar level as the competition, OSS will have an advantage in lower cost but the security issue has not been completely solved. 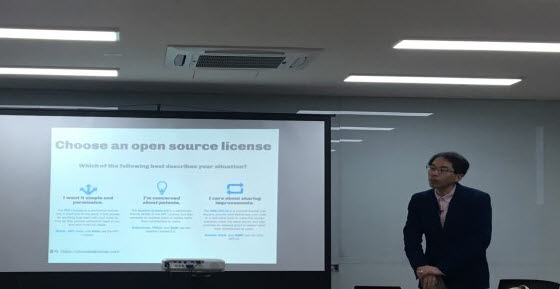