The successful founder of an online-and-offline blended knowledge-sharing platform and a recent graduate of YSB’s Executive (EMBA) program shared his insights in December with students on how they could fast-track a business idea into quick success.

Speaking to the 20th colloquium of YSB’s Yonsei Ventures, Innovation & Startup Program (YVIP) on “Startups With No Capital and Fast Success,” Seung Won Hyun, CEO of D.Share, a company now worth an estimated 330 billion won after attracting 165 billion won of investment, emphasized the importance of “a fast start” in achieving success. 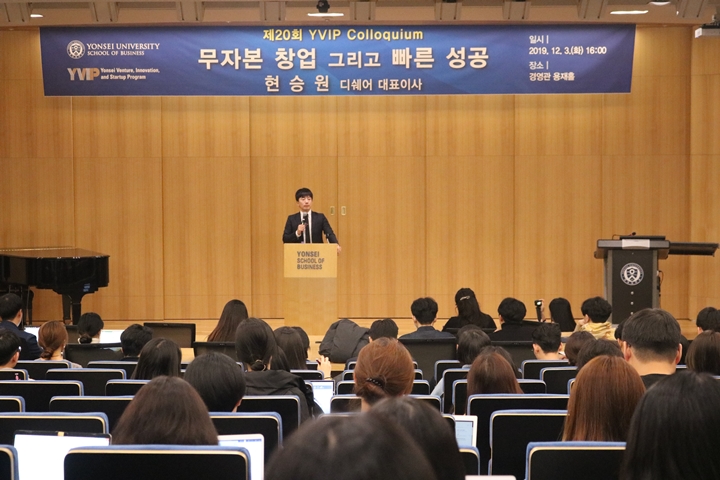 Hyun noted that most people starting a business focus first on their idea for the business. That is important for ultimately determining whether the scale of success is 2 billion or 10 billion, he said, but not as important as taking the first step to get started, even with no capital and a high risk of failure. The time spent to start a business, even if it fails, is not a "waste" but "experience," he said.

Besides, for startups, he said, more important than the market situation are the answers to the questions “do you know your intended business? well” and “do you have the ability to do it?” Entrepreneurs must consider whether they have what it takes to become the best in their field, he said, and cited his own experience. In starting his business, he said, he went against the prevailing opinion that the education industry was unpromising. Instead, he undertook to improve his lecturing skills with an eye to taking the dominant position in the field based on his own capabilities, noting that anyone who makes such a commitment should be confident about it.

His last advice for quick success with a startup is to use technology that already exists. Hyun did not develop or buy any expensive IT services to launch a new website when he started his business of creating lecture videos for students. Instead he used existing technologies. In fact, until its sales exceeded 8 billion won, the company provided lecture videos via USB drives. And it did not launch its streaming service until its sales exceeded 10 billion won. 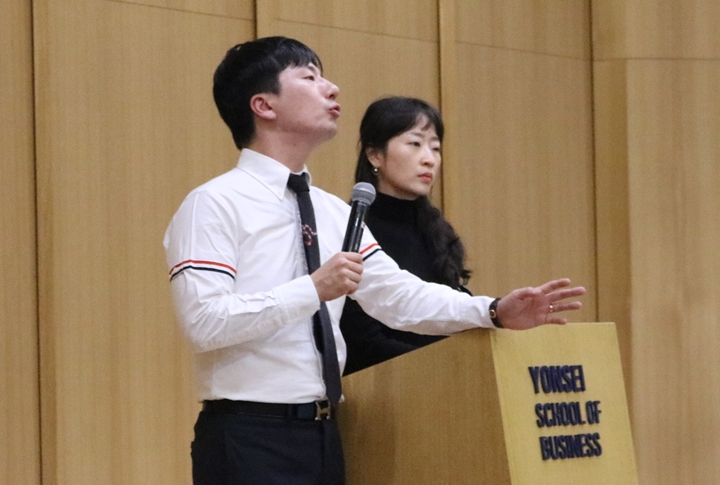 Hyun’s advice was based on hard-won success in a difficult market in which his company is described as a black ocean of profit in an education industry known more for a sea of red ink. From the small beginnings described by Hyun, D. Share has been growing into an online-and-offline blended knowledge-sharing platform equipped with offline management, high-quality content, and price competitiveness that lift it above most existing online course services. Hyun himself is known as a social activist. He has donated more than 100 million won to World Vision International, and is also known as a high-profile supporter for welfare organization.