Three of YSB’s leaders traveled to Aalto University in Finland and ESADE Business School in Barcelona, Spain, in April to foster closer collaboration between the schools in initiating and nurturing student start-ups. 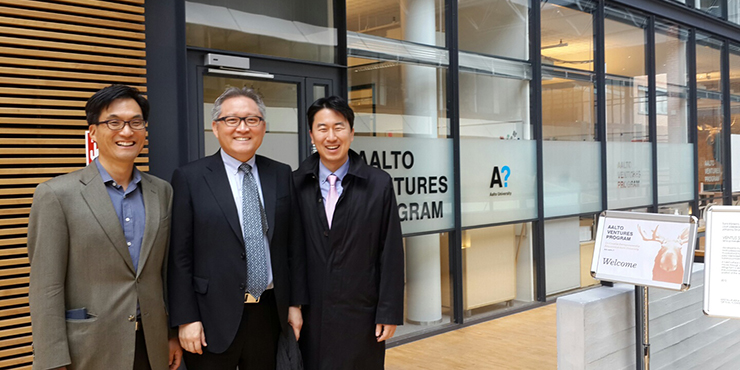 Dean Donghoon Kim of the Yonsei School of Business, Seongmoon Kim, Associate Dean of its undergraduate program, and Subin Im, MBA program Associate Dean, visited Aalto University on April 18-19 to plan the Global Start-Up Competition they will co-host in late September at the YSB Building.  The YSB has hosted numerous start-up competitions and has its own incubation program for student venture teams. However, to emphasize that start-ups should look beyond the domestic market, the Global Start-up Competition is special in that its final candidates must present their start-up ideas in English. The Aalto faculty, which is known for innovative educational programs to encourage entrepreneurship and for nurturing start-ups, will be asked to participate in evaluating and selecting the winning team.

The same YSB team visited Aalto in summer 2015 to benchmark YSB’s Design Factory and Start-up Sauna to begin start-up education and student start-up incubation programs. Moreover, YSB and Aalto agreed to facilitate study by Aalto MBA students to study further at YSB as of the 2016 spring semester. Based on these earlier discussions and commitments, YSB is working toward executing a start-up program-specific Memorandum of Understanding (MOU) with Aalto by the fall semester.

They spent April 20 and 21 at ESADE Business School in Barcelona, Spain, to further their collaboration for start-up programs. ESADE, which was 23rd in the Financial Times’ 2016 MBA rankings, has built the CreaPolis, a specialized 19,835-square-meter building, where nearly 80 firms have located to participate in ESADE’s degree programs. ESADE’s E-Garage (Entrepreneur Garage) lecture room and other specialized meeting rooms are designed not only for business networking but also for hosting forums to bring together firms and government agencies associated with a specific industry to discuss innovation within that industry. Furthermore, ESADE is running an Action Learning Consulting Project that integrates firms in the CreaPolis with undergraduate and MBA programs.

After the YSB Dean and Associate Deans’ previous visit to ESADE in spring 2015, YSB opened the “Start-up Consulting: uCAN” course in the fall semester. They also benchmarked the E-Garage to create the Design Garage, a place in the YSB building where students can use a 3-D printer to make prototypes of their start-up ideas. The program is the first of its kind in Korean business schools. They also made exchange commitments for the Executive MBA program and the GBI MBA program, an MBA program in partnership with Korea Electric Power Corporation.

YSB plans to execute an MOU with ESADE by this fall semester. The agreement is expected to facilitate co-hosting of start-up courses, start-up competitions, and an exchange program for professors teaching start-up courses.